This Easter, we don’t need the half-time show. We need the good news. We need to hear this story again of death getting defeated, and we need to let it soak into our bones.

Jesus said to her, ‘Do not hold on to me, because I have not yet ascended to the Father. But go to my brothers and say to them, “I am ascending to my Father and your Father, to my God and your God.”

Among the many puzzling pieces of this story are Jesus’s instructions to Mary, “‘Do not hold on to me, because I have not yet ascended to the Father.’”

I could imagine, putting myself in Mary’s shoes, that I might want to argue with Jesus. “That’s no reason. Are you saying that after you have ascended, I can hold on to you? How would that work? And why can I not hold you, but next week you will invite Thomas to put his hand in your wounds?”

Another puzzle:  What does John mean when he tells us that Peter’s companion looked into the empty tomb and “believed; for as yet they did not understand the scripture, that he must rise from the dead?”

What did he believe? That someone had stolen Jesus’s body, as Mary originally assumed?

Throughout the gospel, John has used that word “believe” primarily as the verb form of “faith.” The fact that John uses that word here, as the beloved disciple gazes into the tomb that the risen Jesus had recently vacated; leads me to believe that John means something more weighty than believing that the body had been stolen. So, he believed, but he did not understand?

And, why did Mary not recognize Jesus? Because it was still dark? Or, because she did not expect to see him, she expected to see his dead body, she just could not see what she was looking at? Or, her tears clouded her eyes?

And, what was Jesus wearing by this time? John tells us his grave clothes are lying to the side of where he had lain, so what is he wearing? If he wore nothing at all, I think Mary would have noticed and said something. Surely that would have been memorable enough to have made it into the subsequent telling of the story. So, where did he find an extra robe?

Rembrandt painted this scene no fewer than six times, and here’s one of my favorites. 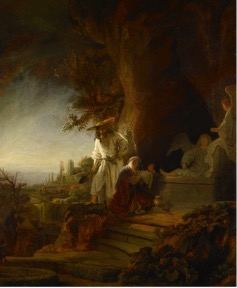 I love this painting, but it raises even more questions. Why is Jesus wearing a pirate’s hat? And why is he carrying that shovel? Because he had to dig his way out? Or, did he take the clothes he’s wearing from the gardener and the frightened gardener threw in the shovel and the pirate hat as a bonus?

And why is the angel inside the open tomb doing the splits like a cheerleader?

Rembrandt’s scene is puzzling and chaotic, and that’s why I think it is faithful to the text in its mood, if not in the details. Disciples are running this way and that, jumping to conclusions, seeing but not seeing, and believing but not understanding; Angels are absent, then present, but sitting six feet apart from each other; and Jesus is raised from the dead but not yet ascended.

By the time John wrote this narrative, belief in Jesus’s resurrection had become an organized movement with elders and deacons and pastors and overseers. John’s account of the first Easter, however, is anything but organized.

It is a story of disorder. As a character in a Flannery O’Connor story said of the resurrected Jesus, “He thrown everything out of balance.”

A disrupted Easter such as we are having today is not at all what we planned. With the death toll rising and the quarantine keeping us physically apart, everything is thrown out of balance. There’s no way to celebrate in the way we planned, with Easter eggs on the lawn, a newly renovated sanctuary full of people and our voices blending together in the hymns we have sung since our childhood. But, the gospel according to John reminds us that a dislocated Easter, a thrown-out-of-balance Easter, an Easter in which we proclaim resurrection while we are surrounded by death—that’s an authentic Easter.

This bold proclamation of the gospel that death has met its match, that death itself is now dead, that death does not get the final word, is easy enough when we can hold death at arm’s length. But it was first proclaimed, it was first experienced, right next to a tomb.

I find comfort this week in the earthiness of John’s resurrection account. Jesus doesn’t appear to disciples who are so tuned in to the divine that they aren’t surprised. They don’t say, “Oh, there you are, risen from the dead, just like you said you would be.”

The resurrection, the interruption of their grief, did not immediately provoke Alleluias. It produced fear and doubt.

In years past, I, like most pastors, felt the pressure to make Easter the perfect Sunday. Attendance would be at a high for the year. The sanctuary fills up with new people, with members seldom seen, visiting family, faithful believers and non-believers who come out of love for their believing spouse or parent. For a pastor, Easter Sunday, of all Sundays, needs to be the best preaching you have in you, hymns everybody knows and nobody complains about, and the quick recall of names of people you haven’t seen since Christmas Eve. For pastors, Easter is the Superbowl Sunday of religious celebration. You bring your A-game.

But this Easter, we don’t need the half-time show. We need the good news. We need to hear this story again of death getting defeated, and we need to let it soak into our bones.

Disruption can be devastating. But it can also bring out the best in us.

Pete Huttlinger was a guitar player, but he knew his way around almost any stringed instrument he could fingerpick, from banjo to dobro and mandolin.

I once heard him claim, with a mischievous smile, to be the best living guitar player in the world without a pulse. Nobody ever challenged him on that, that I know of. He had a rare condition, a heart defect since birth that slowed down his childhood. When other kids were playing baseball and running around the playground, Pete was sitting and playing guitar or banjo or mandolin. Or dobro or bass.

He went to Berklee school of music in Boston, then moved to Nashville and played guitar in the studio and on tour with John Denver the last few years of Denver’s life, then for LeAnn Rimes, Sara Evans, Brad Paisley, Wynonna, Donna Summer, Brenda Lee, Engelbert Humperdinck, and George Burns.

But, he made his reputation among other guitar players as a solo performer, a fingerstyle arranger, a wizard of the fretboard with his left hand and a right hand that could make a six string guitar sound like a full orchestra.

Then, in 2010, at 48 years young, his heart condition led him to suffer a major stroke. He was paralyzed on his right side and when he woke up after surgery, he could barely speak. He couldn’t walk. Not long after that, he had a pump attached to his ailing heart. It used a centrifugal impeller for continuous blood flow rather than the pumping action that a normal healthy heart uses; thus, he had no pulse.

And then, one October, a friend of his called and asked him how he was doing and told him, “Oh, by the way, I booked us five gigs together in December. And you’re playing mandolin. And we’re playing lots of Bach. You have 2 months.”

And so, after the disruption of the stroke, Pete Huttlinger said he had to learn how to play all over again. He had to find new neural pathways from his brain to his right hand.

He had to learn new ways to get the sound he wanted from the instrument. He had to learn how to walk and move through the world in a different way, carrying his battery-powered heart’s assistant in a pack at his side.

Pete died in early 2016. I don’t think anyone would dispute his wife's statement that he did his most creative work in the last four years of his life, after the disruption of having to learn to play all over again through new neural pathways. https://www.petehuttlinger.com

The resurrection of Jesus threw the universe out of balance.

The resurrection of Jesus, and the witnesses who went to their death rather than recant their testimony, “I have seen the Lord,” disrupted everything. Like the beloved disciple that first Easter morning who gazed into the empty tomb, we can believe, but we cannot understand it. We cannot account for it. We cannot prove it.

Faith is not so much about what is going on between our ears. It is, rather, throwing our heart into the future in the direction of Jesus, and then following it.

The rest of that quote from Flannery O’Connor’s character, after he says that Jesus “thrown everything out of balance,” is “If he did what he say he did, there's nothing for you to do but to throw away everything and follow him. If he didn't, then enjoy the minutes you have left the best you can."

Surrounded today by constant reminders of our mortality, let us hear, believe, and live fearlessly in the good news of the gospel: Christ is risen. He is risen indeed, Alleluia.