Darnestown Presbyterian Church (DPC) is Montgomery County, Maryland church established in 1855 located on Turkey Foot Road at the intersection with MD Route 28. DPC is a mid-size 450 member Presbyterian Church (USA) congregation and a member of the National Capital Presbytery.  services are held on Sundays except in the summer when one service is held. Sunday services are child-friendly, and visitors are always warmly welcomed.

The History of DPC

On May 12, 1855, under the leadership of Rev. Daniel Motzer, the Darnestown Presbyterian Church was formally organized as a "Missionary Point" of the Neelsville Presbyterian Church. Prior to that the group had shared a log church at the corner of Route 28 and 118 with Baptists, Methodists, and Episcopalians. The new congregation accepted John DuFief's offer of three acres and, using volunteer labor, began building their Church. The handsome wood-frame building was dedicated on May 22, 1858. Then, in the late 1860s, Andrew Small, a friend of the Church, granted sums of money to be used to building the parsonage (1868) and to establish and build a private academy (1867).

Darnestown's most prosperous years were the late 1800s, and this was reflected in improvements made to the Church at that time. During the 1890s, the old iron fence from the Court House in Rockville was purchased and installed to enclose the cemetery. In 1897, the Church parlor and the bell tower were added to the front of the building. Around 1900, windows in the Sanctuary were replaced with stained glass memorial windows, and the stone wall near the road was built.

A major change to the original building was made about when the southeast wall was removed for the construction of the present chancel area. The Service of Dedication of the Nourse Memorial Chancel was held on May 2, with the Reverend John F. Wells, Jr. delivering the address. At the same a new wing was added to the east. In 1959, the old parlor was opened up to become part of the present Sanctuary. A new parsonage was built in 1961. The old manse, used as a Sunday School building, was torn down in 1969, after having served the Church for 100 years. The new Fellowship Hall, appropriately named for the Church's patron, Andrew Small, was built in 1969 to house the Sunday School rooms. The Service of Dedication of the Andrew Small Building was held on April 27, 1969.  In 2009-10 a major restoration of our beautiful stained glass windows was concluded.

Review the details of the project in our PHOTO ALBUM. At the same time, a new round dove window was created and added to the front top of the Church.

For a more comprehensive review of our history updated in 1980, please see 1980 History. The Church's long history and charm still linger for our community to enjoy it has now been listed on the Historic Sites Register of Montgomery County. For additional interesting information about the rich history of the surrounding Darnestown area, see the Darnestown Civic Association. 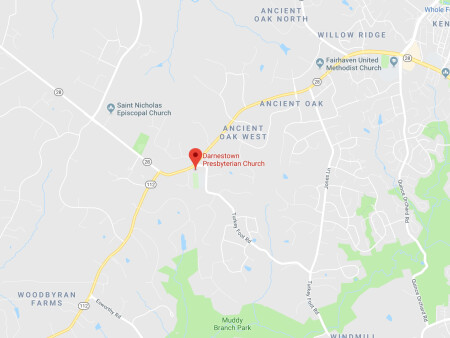 Learn more about our ministries.

Bible Study for All

Sunday worship at 11 am AT DaRNESTOWN ELEMenTARY SCHOOL DURING CONSTRUCTION

Sunday school for adults & children at 9:30 AM

The Nursery is open IN THE ANDREW SMALL BUILDING at 9:15 am

From End to Beginning

The theme arose from the story of Jesus's journey to Jerusalem, betrayal, arrest, crucifixion, and burial. The end. And then, a beginning, the resurrection.

It was a short leap from there to our life together as a congregation. This journey of BEAR began about eight years ago with the vision, continued with the needs assessment, the planning, the fundraising, and finally the build. As the construction comes to an end, we begin anew, not just with a newly renovated space and tool for ministry and service, but with a new vision for our ministry together.

In my personal life, it has always been easier for me to begin new projects than to end old things. My work on building my second guitar serves as a case in point. I have been planning this second guitar for a year now, collecting wood and tools when they go on sale or I find them used. I have sharpened up a new-to-me old traditional hand-planer, and decided on the guitar's size, shape, and model and bought a set of plans.

The hard part is finishing my first guitar. I have finished it several times, but when the bridge popped off one day while I was playing it (from a shoddy job by an inexperienced builder) I let it sit in its case for months before picking it back up and repairing it. I put it off because I knew I would have to go back and address more problems than just gluing the bridge back--I would have to refinish the top to create a better gluing surface, replace the saddle (the piece of bone in the bridge that keeps the strings at just the right height) and learn the right technique to use animal hide glue. As I knew it would, it took me many hours (not including drying time) to finish my last guitar.

It has been a reminder of all the ways that finishing or ending things well can be so much more difficult than starting a new and exciting project. Or relationship. Or job. Or exercise program.

How about you? Anything sitting around that needs some hard or tedious work before you can find closure and begin anew? Someone difficult to forgive? A well-meaning effort to change someone that is time to let go of? A new beginning of the relationship?

Every generation wants to sing a new song, begin a new thing, discern a Spirit-led future  unimaginable to previous generations. What will we have to release to make room for God to do a new thing among us?